Donor: National Implementation Unit of the Ministry of Industry and Commerce

Providing transparency over the national trade policies is one of the World Trade Organization’s (hereinafter – the “WTO”) main roles.  To that end the WTO carries out periodical reviews of the trade policies of each of its Members (hereinafter – the “TPRs”). The collective assessment exercise is based on a Policy Statement (also commonly referred to as a “Government Report”), submitted by the Member under review and a report prepared by the WTO Secretariat. The reports are examined by the WTO members before and after the TPR meeting, as well as in the TPR meeting held in the WTO, through the set of Q&A. The meeting produces recommendations of WTO Members to the Member under the review. Even though not enforceable in the WTO Dispute Settlement and not formally binding, such recommendations are aimed at ensuring better compliance of the trade policies of the Member under the review with the requirements of the WTO. They could also guide such Member’s agenda of future, post-TPR, reforms, inter alia facilitating such Member’s access to Donor’s support in favour of some of such activities. This project is carried out under the component D – Supporting Better and More Inclusive Policies – of the Lao Competitiveness and Trade Project, launched by the World Bank and a multi-donor trust fund. While It is focused on providing support to MOIC through the Department of Foreign Trade Policy to prepare the Government Report for the WTO’s Trade Policy Review planned for after 2019 and other activities related to WTO Trade Policy Review Process, in accessory way, it also contributes to the other pillars of the Lao Competitiveness and Trade project, in particular, the pillar A – Improving Business Environment and the pillar B – Facilitating Trade and Connecting to Markets.

The objective of the assignment is to assist the Government of Lao PDR to undertake a detailed analysis of the policy environment affecting trade, assessing areas where the country has made progresses and the areas that need further improvement in meeting its accession commitments and general requirement of the WTO membership. Based on this analysis, the objective is to inform the drafting of the government’s Policy Statement under the Trade Policy Review mechanism. In addition, the Government has decided to use this exercise to improve its relevant domestic policies and coordination between its agents, as well as to assess the costs and benefits of graduating from the status of a LDC to one of a developing country, which entails additional commitments under WTO as well as possible loss of preferences and aid.  To ensure a smooth transition – the Government intends to identify a strategy covering both possible required reforms and their impact on their development strategy as well to ensure its preferential access to markets as much as possible. The elaboration of such a graduation strategy requires both analysis and the identification of alternatives as well as awareness raising and training of both private sector and the various Governmental stakeholders. Lao PDR aims to use the analysis undertaken as part of the assignment to advance its own economic reform agenda in line with existing commitments.

“The objective of this assignment is to enhance trade policy capacity of the Government of Lao PDR through technical assistance in preparation, participation and follow-up on the WTO TPR exercise.”

In preparation to the implementation of the project the following anticipatory activities were implemented by IDEAS Centre:

2. The Mission to Vientiane

In order to ensure that the government is assisted in collecting the data requested by the WTO Secretariat, answering their questions, and providing comments on the draft of the WTO Secretariat’s report, it has been decided that the mission partially overlapping with the second (fact-finding) mission of the WTO Secretariat to Vientiane be undertaken. The mission was undertaken by the two IDEAS Centre’s experts involved in the Project – Mr. Nicolas Imboden, the Team Leader, and Dr. Leonila Guglya, International Trade Economist. When in Lao PDR, they were assisted by Dr. Pkaiphone Syphoxay, the Local Expert. The Mission has proven to be successful in facilitating the collection of the necessary information from the multiple authorities. In fact, despite the requests made, the WTO Secretariat appeared to have received only limited information in certain substantive areas before their fact-finding mission begun. In part, this has happened due to lack of understanding by the authorities of what exactly is required, aggravated by the language barrier. By being able to interact with both – the WTO Secretariat experts and the representatives of the local authorities on the spot, as well as due to their active involvement of the accession of Lao PRD, when a number of policies subject to the review were shaped and elaborated, the experts of IDEAS Centre were able to make a viable contribution to improving accuracy, completeness and overall quality of the report of the WTO Secretariat. The task has also involved a strong research element. As far as another purpose of the Mission – preparation of the Government’s Policy Statement, is concerned, the experts were able to establish an initial outline of the paper and discuss its objectives, as well as the preparation modalities, with the Laotian Government. Since the Policy Statement essentially amounts to a response to the key issues raised in the Report of the WTO Secretariat, in final shaping of which the experts of IDEAS Centre were actively involved, the synergies between the two were duly explored. Moreover, fact-finding interactions with the Ministries were used to explain to them the purpose of the WTO TPR process and the approach to be adopted in the Statement , as well as to receive their initial feedback thereon. Additional information with respect to the subject matters pre-identified as a focus of the Statement was also requested. As far as the content of the Statement is concerned, it was, in particular, decided to a) concentrate on the areas, which were not fully defined as well as on the weaknesses of the foreign trade regime identified by the report of the Secretariat; b) elaborate measures which could reinforce the framework of making and enforcing the trade policies in Lao PDR in order to ensure that the relevant laws are fully implemented and the reform agenda is coherent and could be effectively implemented; and c) to develop a sound graduation policy, in particular as far as its trade-related aspect is concerned (see Annexes … for the outline and detailed outline respectively).

Upon return from the mission to Vientiane, the experts of IDEAS Centre immediately [re-]turned to the research necessary for the preparation of the Policy Statement and occasional drafting. The research and drafting work has also continued in Vientiane, in parallel. Numerous exchanges and consultations between IDEAS Centre and the government have taken place all through the process, which was concluded in a due time with the submission of the Statement to the WTO on 2 September 2019.

4. Assisting the Laotian Government in Answering the questions from the WTO Members

After both – the WTO Report and the Government’s Policy Statement were circulated to the WTO Members, including Lao PDR itself, on 14 October 2019, IDEAS Centre assisted the Government of Lao PDR in answering the 185 questions posed by the 12 WTO Members. The deadline for the written questions was set for 4 November 2019, while the answers were submitted to the WTO Secretariat on 17 November 2019, e.g. before the deadline set.

On 14-15, and, later, on 19 November 2019, IDEAS Centre’s experts assisted the Laotian delegation in Geneva in the preparation for the TPR meeting, which included assistance in drafting the interventions and coaching the delegation with respect to the progress of the meeting-to be. The experts also participated in the meeting on both days.  The meeting was well attended by the WTO Delegations. Overall 22 Delegations, ASEAN and the LDC group have spoken. Out of those: 11 delegations which have submitted the advance questions and 11 delegations who have not submitted such questions. The ASEAN Member states, Canada, China, Singapore and the USA were represented on Ambassador level.

At present, IDEAS Centre is assisting the Laotian Government in answering 25 follow-up questions submitted by 5 WTO Members. The responses are due in one month time after the end of the meeting, e.g. by 20 December 2019. The Project will conclude with the submission of the Final Report for the activity, inter alia, identifying potential next steps related to following up on the TPRM exercise.

H.E. Mrs. Khemmani Pholsena, Minister of Industry and Commerce of Lao PDR, tells us about the importance of this WTO transparency exercise (video) 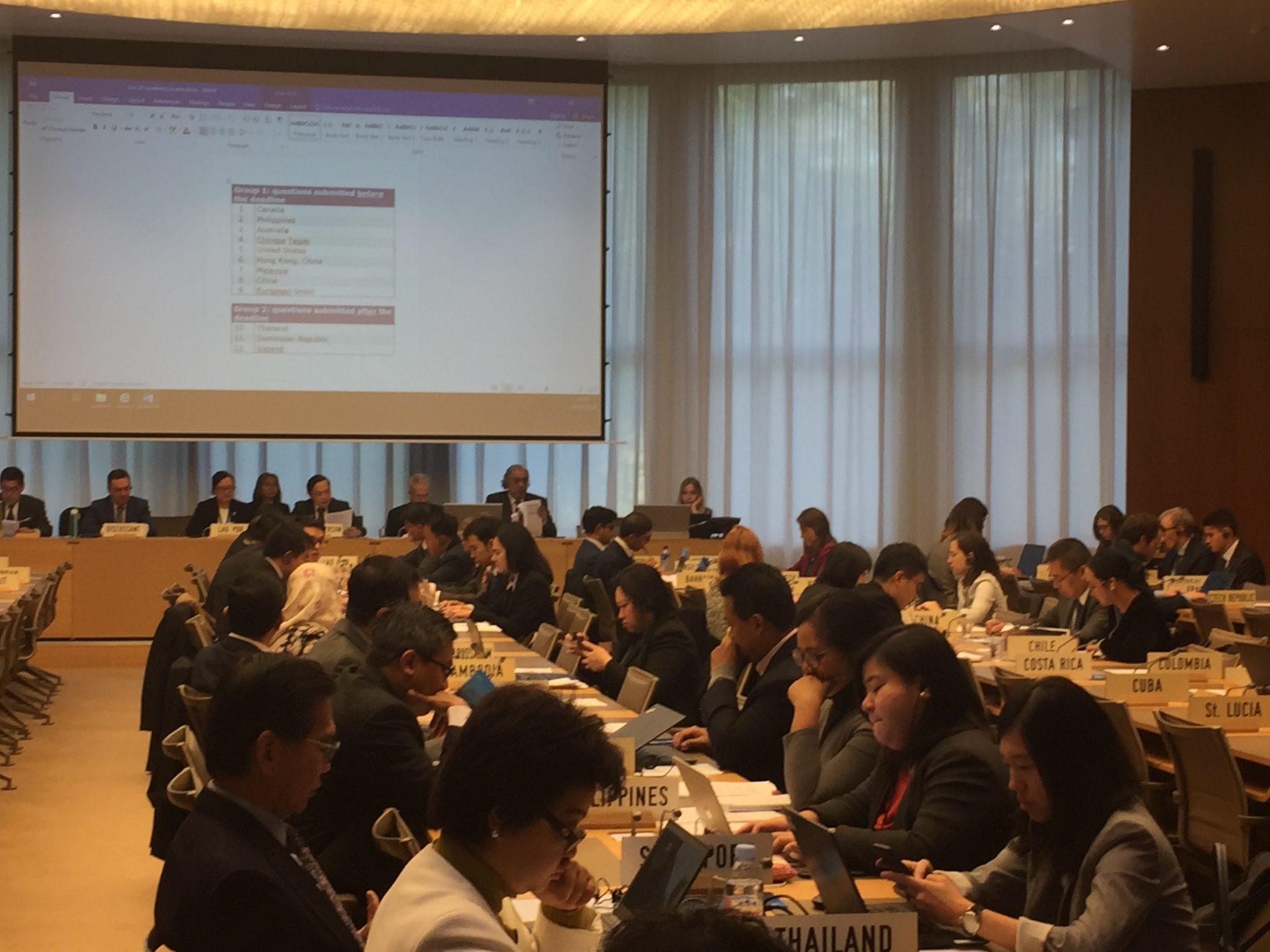 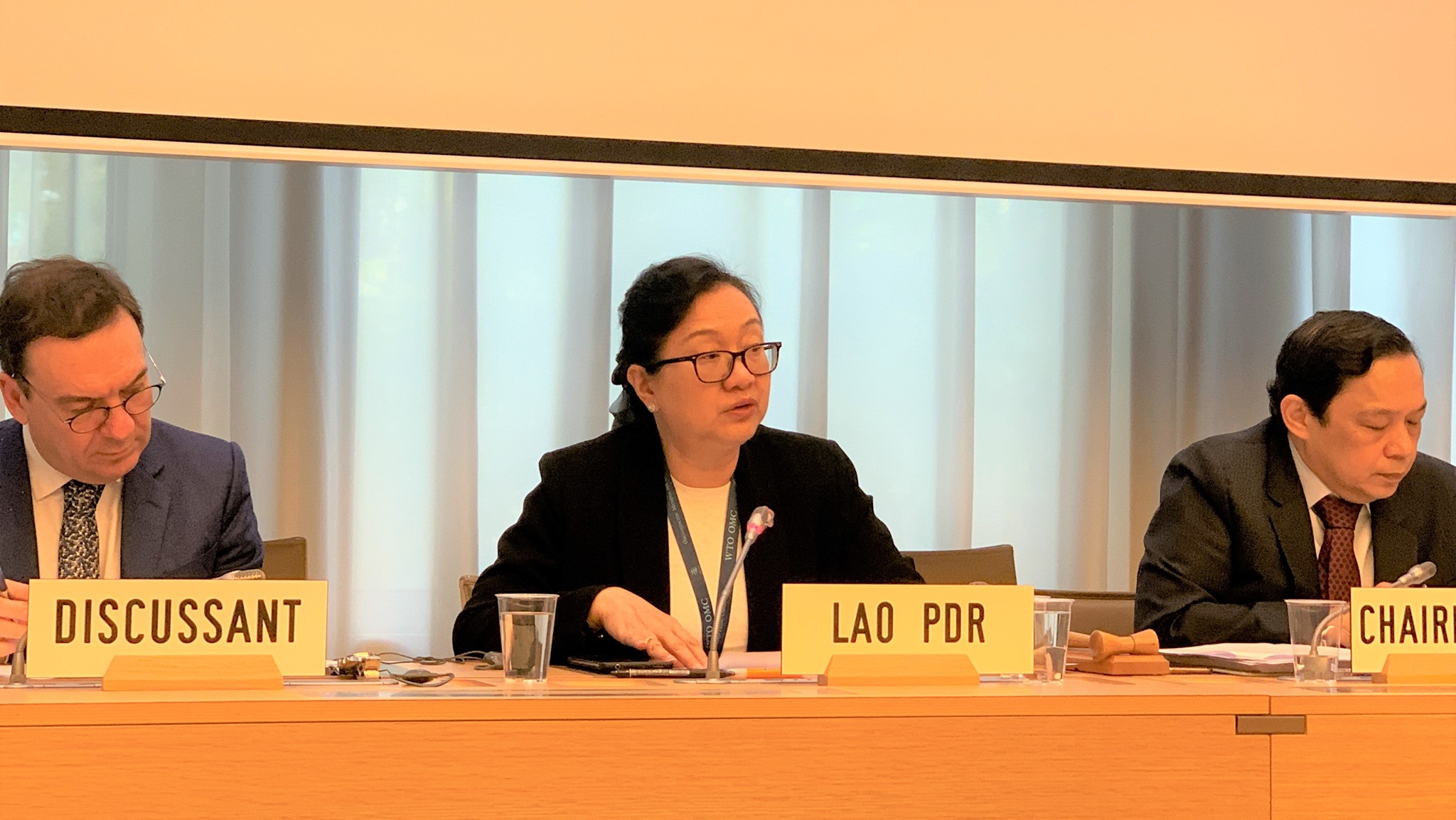 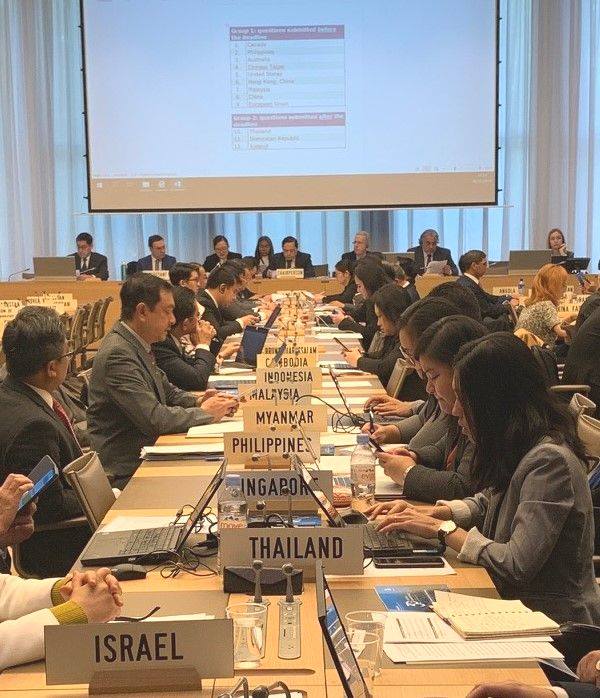 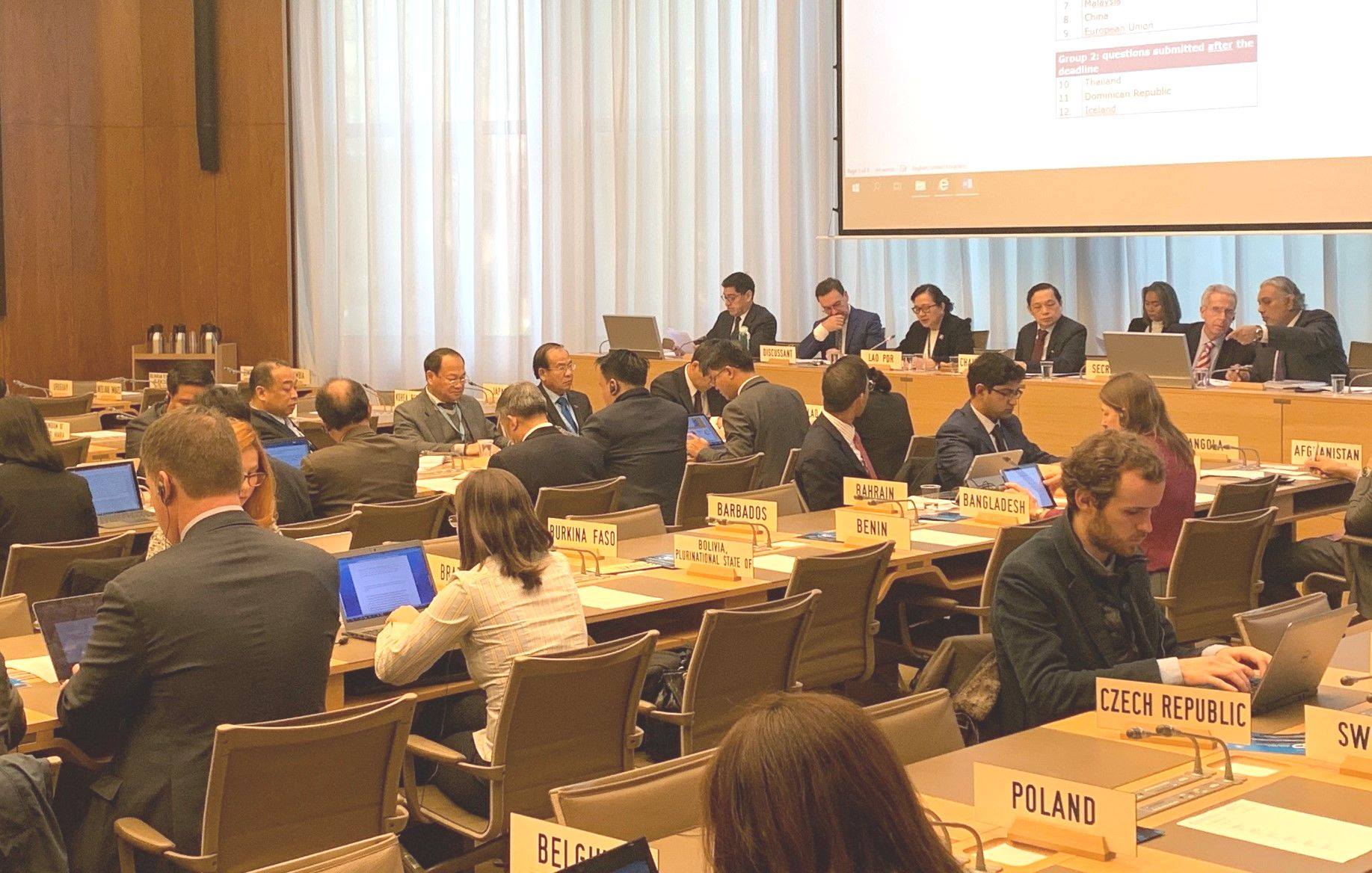 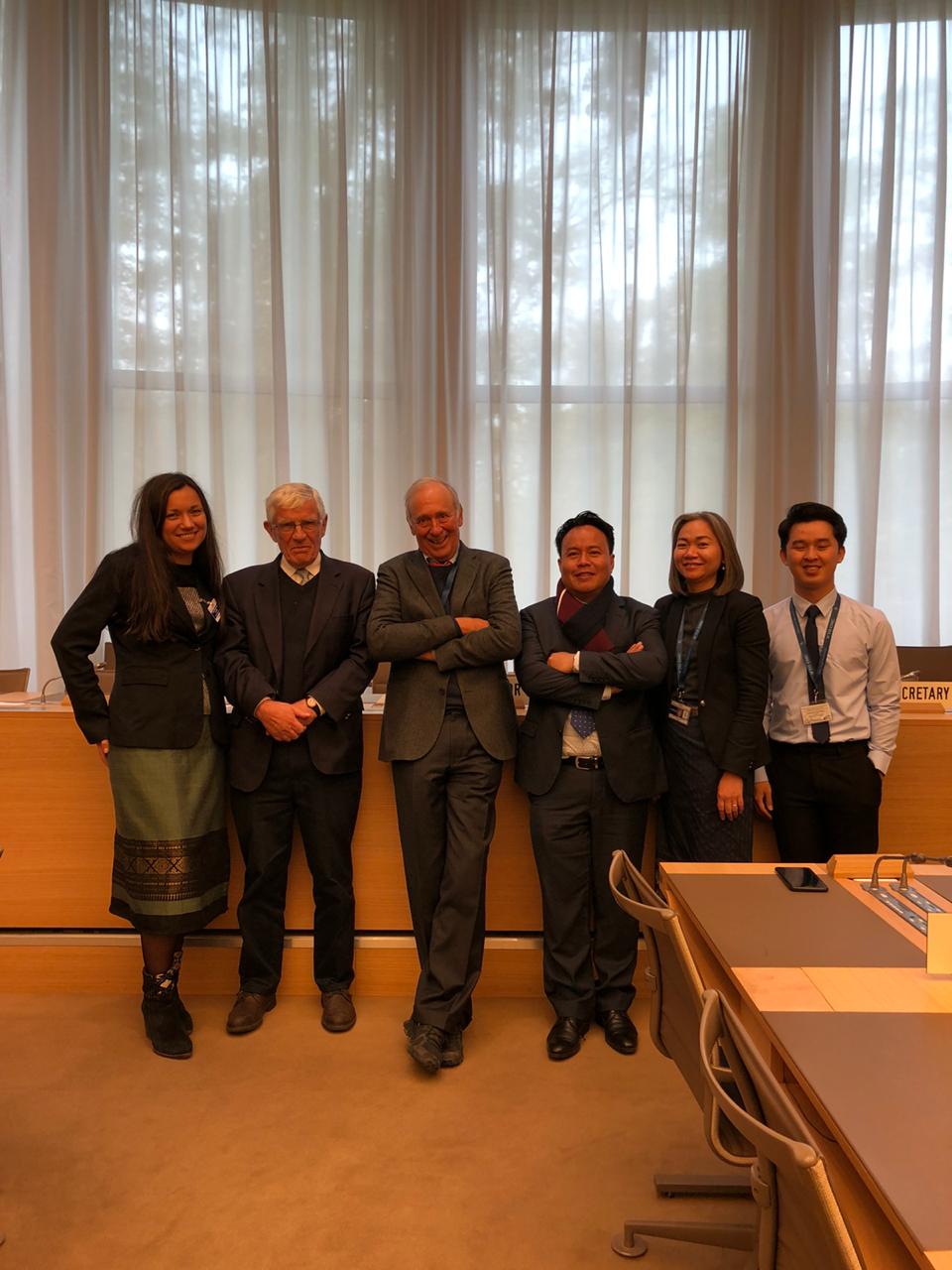 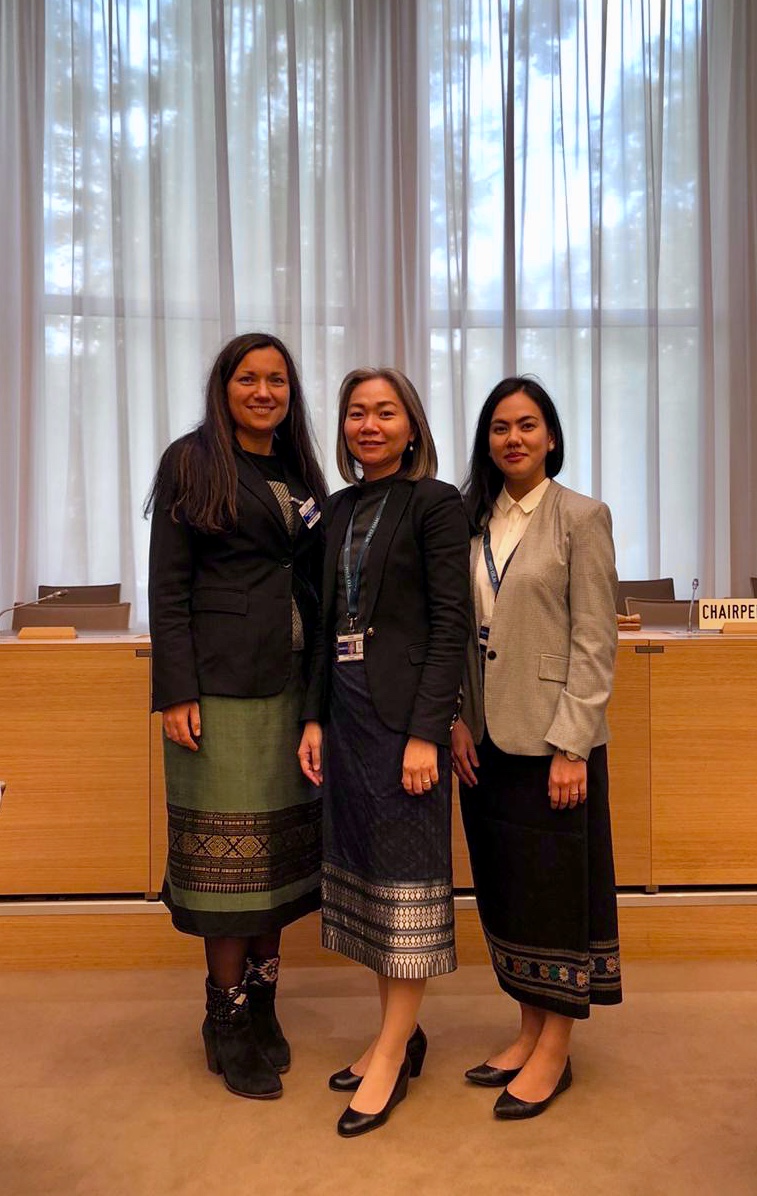 Receive our newsletter to learn more about our current projects